Genetic technologies have many exciting applications in crops. Perhaps one of their most under-rated features is the potential to make our plants more disease resistant. Providing plants with the ability to fend off disease without requiring pesticides has immense benefits for our environment, economy and health.

Professor Jonathan Jones’ group at The Sainsbury Laboratory, Norwich, has successfully developed a late blight resistant Maris Piper potato, PiperPlus 1.0, which is ready to be commercialized when the UK puts in place workable regulation for crops improved with the genetic modification (GM) method. Not only does PiperPlus 1.0 thrive without the weekly fungicide sprays needed to control late blight, it also has other qualities that will lead to less food waste during production and provide a higher quality product for consumers.

The video shows on the right, resistance to tuber blight in PiperPlus 1.0, compared to (on the left) the susceptible Maris Piper.

Potato late blight was the biotic cause of the Irish Potato Famine in the 1840s and still plagues UK farmers today. Much of the success in potato agriculture is due to improvements in fungicide formulations and spray regimes, but these need to be continuously adapted as strains become insensitive or resistant to the chemicals.

Even though this method is highly effective, it is an unsustainable and expensive strategy that leaves UK agriculture on a chemical treadmill. An additional benefit of protecting crops with genetics instead of chemistry is that fewer tractor journeys are required, reducing CO2 emissions and soil compaction.

How could you make your favourite potato less reliant on fungicides?

Some wild relatives of the potato, such as Solanum americanum, are blight resistant. Scientists in the Jones group successfully isolated Solanum resistance genes and transferred three of them to Maris Piper potato, conferring full late blight resistance. This led to the development of the PiperPlus project. The PiperPlus 1.0 potato is also resistant to tuber blight, which affects tubers during storage and can lead to significant losses post-harvest.

PiperPlus 1.0 has additional tuber quality traits that will make it easier to store the potatoes without losing product quality. A project collaborator, Simplot, provided the technology to silence certain genes that cause cold-induced sweetening and tuber bruising. Reducing the amount of some sugars formed during cold storage means that the tubers will form less acrylamide during high temperature cooking (such as frying or roasting). This will allow farmers to store potato tubers at low temperatures which prevents sprouting whilst maintaining high tuber quality. Additionally, the lower propensity of these potatoes to bruise, which can happen at any stage from harvesting to processing, means that fewer tubers will be discarded and more will be available to eat.

“The main benefit of this technology is an environmental one”, says Jonathan Jones. “You have less fungicides in the environment, less tractors compacting soil and burning diesel to release carbon dioxide. And because of improved tuber quality, you have much less food waste.”

Has PiperPlus 1.0 solved all of our problems?

“PiperPlus 1.0 is already an excellent product with many beneficial traits, but late blight is not the only threat to UK agriculture.” says Agnieszka, “During our field trial in Cambridge almost all our potatoes became infected with Potato Virus Y (PVY), which presented us with a new challenge. The idea for PVY-resistant PiperPlus 2.0 was born, and the BBSRC generously granted us funding to pursue this project.”

Most potato varieties in the UK are PVY susceptible. Potato Virus Y is one of the most important viruses that affect potato production and is transmitted via sap-sucking aphids. The virus can be transmitted in potato tubers which means that if they are used as seed potatoes, the viral load will progressively increase.

Seed potatoes need to be certified as having very low levels of PVY. About 75% of the UK’s seed potatoes are grown in Scotland due to its cooler climate which reduces aphid populations. A PVY resistant potato would mean that seed potatoes could be grown in warmer climates, and that England would be able to produce its own seed potatoes.

Jonathan Jones’ group in collaboration with their Polish colleagues from IBB PAS and IHAR Młochów isolated a PVY resistance gene from a wild potato relative, Solanum stoloniferum. The first PVY-resistant and blight-resistant PiperPlus 2.0 lines have already been planted in a field trial to test their performance.

What about other potato varieties?

“Home growers rarely spray their plants with pesticides, which means that a blight and PVY resistant variety of their favourite potato could make a huge difference to them.” says Jonathan, “We know this technology has great implications for industry, but we want the general public to have access to improved varieties as well. I think it’s important that they are given that option.”

In addition to developing a Charlotte Plus, the team wants to improve the Hermes potato variety which has a high starch dry matter content, which is important for making crisps. The Hermes Plus 1.0 would have late blight resistance as well as improved tuber qualities. Crisps are cooked at high temperatures, so reduced acrylamide formation during the process could be a great advantage for industry. A Hermes Plus 2.0 with added PVY resistance is also in the pipeline. 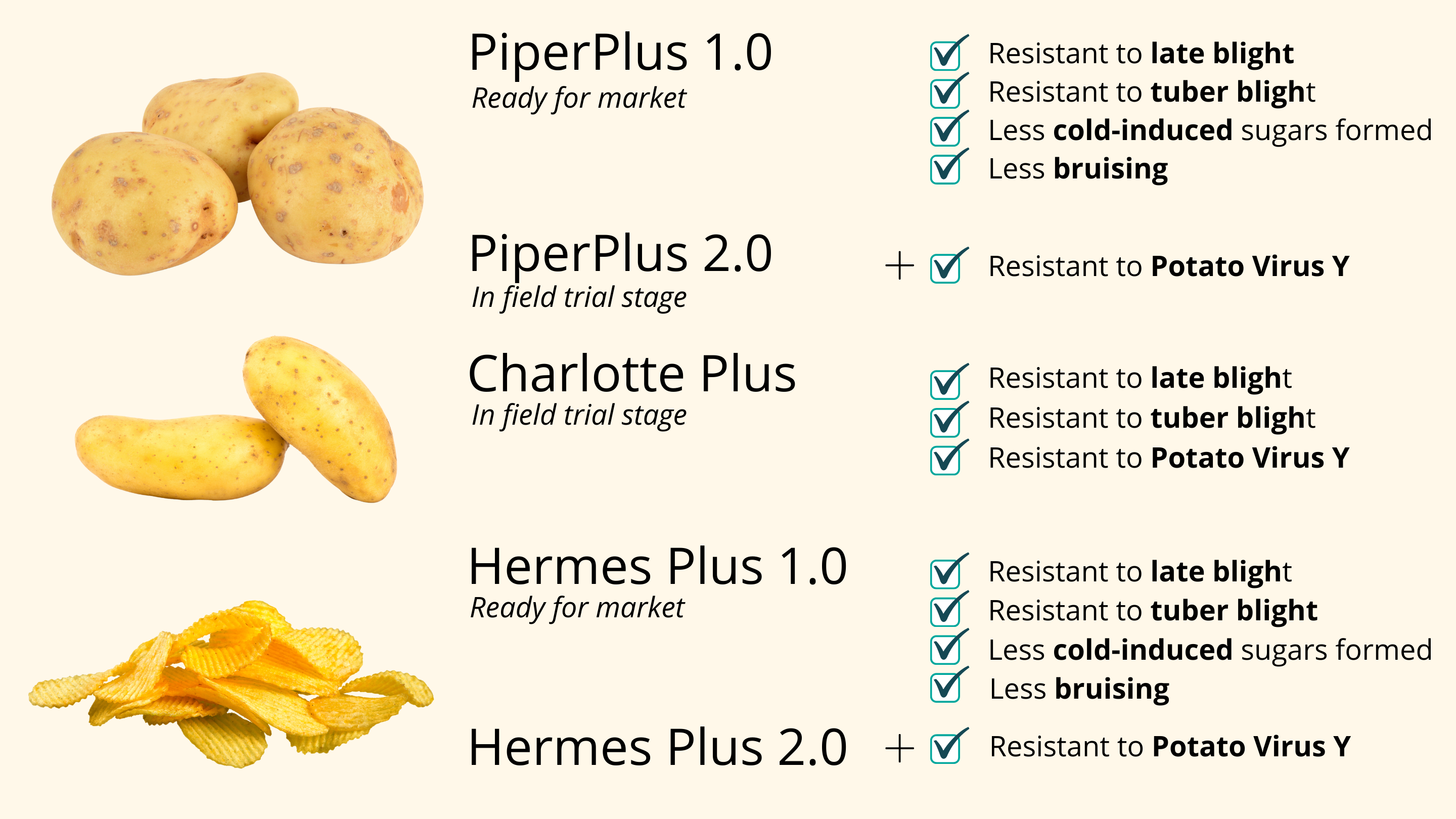 However, transgenic potatoes such as these are currently regulated under the same strict GMO legislation as in the European Union, making it unlikely to end up on UK supermarket shelves any time soon. A new Precision Breeding Bill has been introduced to reduce the regulatory load on Precision Bred Organisms which are genetically engineered organisms that contain changes which could have been achieved via conventional breeding methods. Because potato and the wild relatives used for resistance genes are not able to be cross bred, they would not qualify as Precision Bred Organisms under this act.

“If you have a potato that is inherently resistant to disease and shows reduced post-harvest losses, which will need less pesticides and reduce food waste - to me that’s obviously a good thing” says Jonathan. “But we still need legislation that enables plants improved with the benign and effective GM method to be brought to public use without an excessive regulatory burden”.

“We’ve been able to integrate so many excellent qualities within the Maris Piper that could greatly benefit our environment and our people.” says Agnieszka, “Developing an even better Maris Piper, Charlotte and Hermes potato for the UK is something we would love to be able to achieve.”