Plant diseases can spread like wildfire and by the time they are detected it may be too late to contain them. As we have learned with human diseases - prevention is key. We must aim to detect potential plant diseases before they become pandemics in crops.

To provide food security in the future, it is crucial to have global pathogen surveillance systems in place that not only focusses on crops but also wild host plants that can serve as reservoirs for plant diseases.

Emerging plant diseases: Are we looking in the right places?

Typically, we look towards farms for signs of emerging crop diseases. However, about one third of the utilised agricultural area in Europe is occupied by permanent grass lands, and crop fields are often heavily treated with fungicides as a preventative measure against many plant diseases. Therefore, the absence of disease on farms does not necessarily indicate an absence of pathogens in the surrounding environments, where these microbes can thrive and often stay undetected. This makes the disease surveillance of uncultivated vegetation crucial for early detection of emerging plant pathogens.

In August 2021, scientists from the Kamoun group at The Sainsbury Laboratory discovered blast disease in southwest Germany on the wild grasses, foxtail millet and crabgrass. Their results were made available by preprint on biorxiv.org. 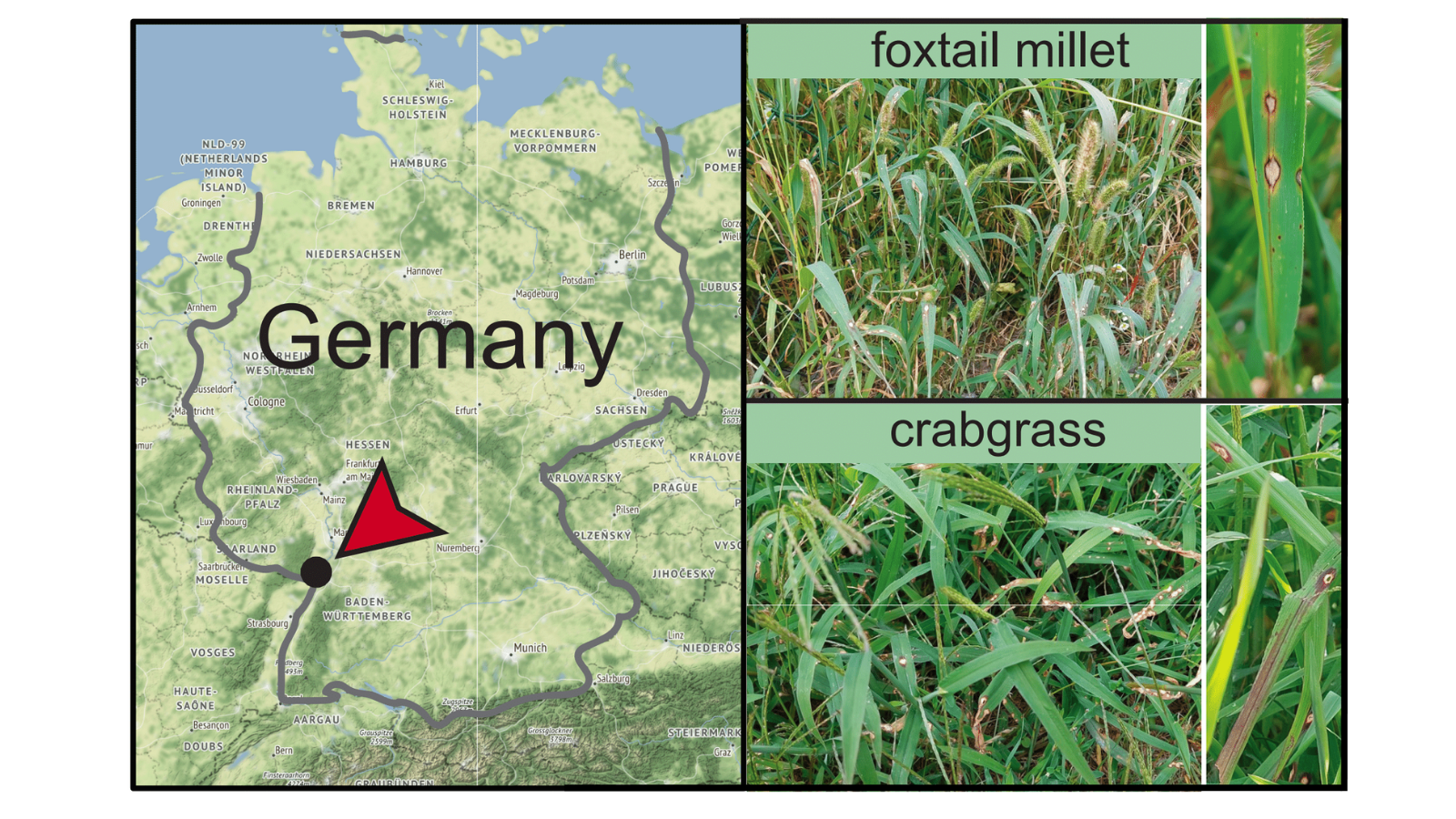 Blast disease is caused by the fungus Magnaporthe (Syn. Pyricularia) oryzae, one of the most devastating plant pathogens in the world, but was assumed to be no concern in central and northern Europe due to unfavourable climate conditions. We may need to think again.

Why should we be concerned about sick grasses?

Spotty leaves in a patch of unremarkable wild grasses aren’t something most of us would feel particularly worried about (or even notice). And yet, these inconspicuous-looking blades of grass in southwest Germany were hosting one of the most devastating plant pathogens: the blast fungus.

Magnaporthe oryzae develops into different ‘types’ which are specially adapted to a particular grass species, including major crops such as wheat, barley and rice – cereals that provide the majority of calories for human consumption. The type that was sampled from the wild grasses in Germany was a foxtail-infecting strain, meaning that foxtail is its preferred host and the pathogen doesn’t appear to be an immediate threat to surrounding cereal crops.

However, the blast fungus has a history of repeated host jumps, where the pathogen switches its preference from a wild grass to cultivated cereals. Host jumps are not uncommon for plant pathogens and resemble what happens when zoonotic diseases jump from animals to humans.

The Covid-19 pandemic is an unfortunate example of the consequences of such host jumps. The latent risk of host jumps is not only a concern for humans, but also for crop cultivation, and subsequently global food security.

Laboratory experiments showed that the blast fungus type infecting the wild grass foxtail millet can also infect wheat and barley varieties under laboratory conditions. This is concerning, because Germany is at the centre of the Central European cereal belt and, together with neighbouring France, is a major producer of wheat and barley.

Cereal crops and permanent grassland occupy about two thirds of Utilized Agricultural Area in the European Union. The close proximity of wild grasses to crops, as well as their considerable abundance, makes the possibility of a pathogen host jump something we need to be prepared for.

Climate data and predictions suggest that blast disease occurrences might become more frequent in central Europe. The blast fungus thrives under hot and humid conditions, which is why central Europe has not considered this plant disease a major threat up until now. Climate change, as well as increased global connectivity, means we need to be prepared for plant diseases that weren’t a threat before.

Are we giving ourselves enough time to do something about it?

Robust and sustainable preventative measures take time to develop, which is why pathogens need to be detected as early as possible. We now have the tools and knowledge to breed disease resistant crop varieties with the same valuable traits as commercial varieties. Genome sequencing technology also allows us to study how pathogens evolve and where they originate from. This can inform the disease management strategies needed to maintain healthy, high-yielding crops.

Even though modern plant breeding technologies now enable us to develop disease resistant varieties in a much shorter span of time than conventional breeding, we need to consider that it can still take years before a successful line is deployed in farms.

So, what can you do?

We need more eyes on wild grass patches as they are key in detecting and preventing emerging cereal diseases. We encourage you to keep your eyes out for blast symptoms on wild or cultivated grasses. If you see blast disease symptoms contact Cristina Barragan, which will help us understand the extent of blast distribution in central Europe.